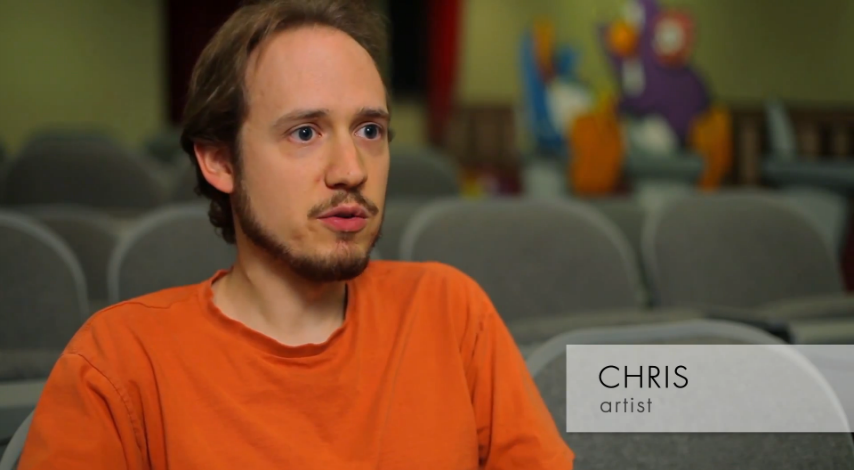 The Hyper Hippo team just posted their third video in their interview series, and I’ve been looking forward to seeing this one in particular… An interview with Chris Hendricks, otherwise known as Screenhog.

I remember when I first met Chris and the rest of the development team at Club Penguin. I was immediately struck by his kind, gentle and honest demeanour. There was nothing pretentious or arrogant about him. He just seemed like this amazingly humble and wise soul who was open to feedback or input from anyone he met.

Back then, I had just joined the moderation team in an effort to do something different in my life. I had been working at a golf course as an accountant, while spending every possible free moment I could being “creative”: writing, producing music, designing album covers and websites, all while also trying to be a half-decent parent at the same time.

I spent my work days dreaming of doing something that I love for a living. Drawing cartoons, making video games, writing stories, or designing websites… Something that felt more like “me”, with a company I could believe in. I didn’t play golf, and didn’t enjoy reconciling ledger accounts. I didn’t like the idea of using millions of gallons of fresh water just to make green grass to play golf on. I wanted to make a difference. To work for a company that valued giving back and charity. I considered working for non-profits or charities, but I was still worried about making ends meet to feed my kids.

I first heard about Club Penguin from my friend Lisa, who had started working there a few months before me. It sounded too good to be true, and I wondered if the company would actually be able to pay her. When I first logged into the world of Club Penguin, I didn’t understand it at all. I visited one room, tried to chat, got no response, then logged off. Then Lisa told me about how the company donated a year’s supply of diapers to an orphanage in Rwanda. Suddenly I was very interested… A cartoon video game website that also happened to give back to the world? I submitted my résumé the next day. I would figure out how to feed my kids somehow.

I watched the CP development team from the outside for most of my first year. I was convinced that both Lance and Chris were both geniuses from some distant galaxy. I was the giddiest school boy in the world when I officially joined the dev team on the 4th floor. The creative energy in the room was electric. I sat next to the launch whiteboard where the team would jot down the next few weeks worth of launches and the theme of the various item catalogs.

The guy I admired the most was Chris — he was even-tempered, sharp, logical and multi-talented. Being around him made me feel calm, and I appreciated that he was honest about ideas or things that he didn’t like. Chris was one of the very few people that seemed to share my interest in CP history. He openly shared his digital files, sketchbooks, and ideas with me and everyone else on the team. Meanwhile, I became the company clutter bug, feverishly collecting every scrap of paper and napkin doodle I could find (my previous boss Nicole called me the ‘napkin collector.’)

Chris was the most cooperative and helpful of the whole dev team, and he openly shared whatever he could to help the great archival cause. He even drew a picture on the whiteboard to remind everyone to dump all their concept art in the “Archive Dumpster” so I could jump into the files later and archive them for safekeeping.

There are a handful of times when I’ve cried about something at work. When Chris announced his departure from the team, I cried. It was sad. I was happy for him, but missed his presence. Chris represented the heart of the development team to me — the warm nucleus around which all the other creative craziness would spin. On his last few days, he presented a brief history of the company in the early days. It will go down in history as one of my favorite meetings of all time. It inspired me to work on a video about the same topic with Johnny — “New Horizons”.

I didn’t want Chris to leave. I wanted to keep working with him somehow. I asked him to work on blog posts with us, and he came up with some great “history of puffles” posts for the site. (Fans occasionally remind me that we need to work on the third instalment of that series.)

Now Chris is working on brilliant new things with a team of very bright people on a new development team. It’s fun to watch them from afar and see all the creative ideas bubbling to the surface. I hope they create lots of success. This little city of Kelowna has some amazingly talented people in it, who come up with some very special things when they work together. A team with Screenhog on it is a very lucky team indeed.